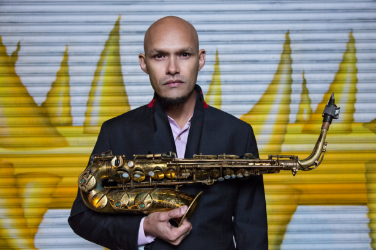 The music of Puerto Rico native Miguel Zenón has often been described as Latin jazz. It’s a reference not only to his provenance and that of his band but also to the bubbling rhythms within his engrossing tunes and the subjects that animate his immersive records—an album based, for instance, on Puerto Rico’s intoxicating plena tradition, or another rooted in centuries-old jíbara. But the hyphenate is an unnecessary restriction on Zenón as a composer, thinker and brilliant saxophonist, and on jazz as an idiom that has crossed nearly all geographic borders during the last century. Just as generations of jazz composers and improvisers before him recombined their own roots into new strains, Zenón uses the sounds of his homeland to create what the MacArthur Foundation, which awarded him a “genius grant” a decade ago, calls “an entirely new jazz language for the 21st century.” This is, simply put, jazz executed at the highest level.

Zenón has done this, in large part, with one of the longest-standing and best quartets in music. With Austrian bassist Hans Glawischnig, Venezuelan pianist Luis Perdomo, and Puerto Rican drummer Henry Cole, Zenón—a lover of complex mathematical systems—has developed a highly specialized compositional approach, shared now like air between the members of this incomparable band. Despite the rigor of their approach, their music is as approachable and kinetic as it is erudite and exploratory, a relic of the social history that frames so many of Zenón’s touchstones. The audience has as much fun as the ensemble. On the new “Sonero,” Zenón’s liquid alto tone and his quartet’s seamless ensemble playing brings to life the songs of the incredible salsa singer and songwriter Ismael Rivera, again pulling regional influences into a worldwide exchange.