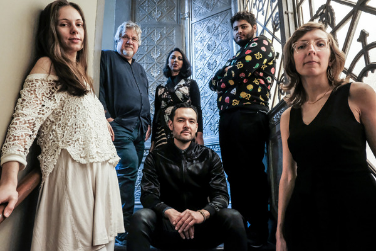 In the span of less than two decades, Mary Halvorson has revolutionized the vernacular of jazz guitar. In 2016, NPR noted that she “sounds like no other guitarist,” a sound The New York Times’ Nate Chinen breathlessly described as “a flinty attack, a spidery finesse, and a shiver of wobbly delay.” In the earliest days of her ascendance, she earned the imprimatur of collaborators like Anthony Braxton, Eugene Chadbourne, and Trevor Dunn, predecessors responsible for musical frameshifts of their own. But her writing and work as a bandleader, from her commanding octet to her guilelessly conversational trio Thumbscrew, have established her as one of the leading voices of the modern jazz renaissance. A rapacious student of previous guitar masters and a fastidious technician, Halvorson has achieved that most rare combination—a singular sound, adaptable to infinite contexts.

But her newest band, Code Girl, might well be her most audacious and compelling move yet. Retaining the essence of Halvorson’s instantly identifiable approach to timing, tone, and texture, Code Girl expands it with the support of a sympathetic quartet of collaborative players. Bassist Michael Formanek and drummer Tomas Fujiwara, the backbone of Mary’s trio project Thumbscrew, return here, with trumpeter Adam O’Farrill  adding bluesy moans and scrambled howls in the open spaces. And then there’s Amirtha Kidambi, a staggering singer whose extended techniques and ability to seesaw between operatic flair and soulful gusto gives her freedom to roam inside these songs. Halvorson herself has never sounded so authoritative, so attuned to how every note should waft or ever signal should be bent. If you want to understand the promise of jazz a century after it marched out of New Orleans, this is the perfect indoctrination.