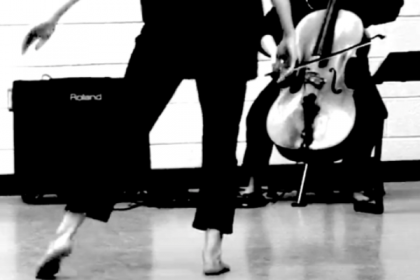 Martius, a musical inspired by Shakespeare’s play Coriolanus, follows the breakdowns of family relationships against a backdrop of political conflict and warfare in Rome. Martius, a decorated soldier, is forced by her mother into a political career. What happens when the people reject her? What happens when Martius herself rejects being a pawn in the city’s battles, the senators’ political games and her mother’s ambitions? Will this Roman family—and by extension, Rome—break out of a cycle of glorifying bloodshed?

Using the sheet music for Paganini's "24 Caprices for violin in B-minor," Robson created a series of movement-based rule systems that generates a series of unexpected and interrupted movement sentences to challenge habitual understandings of weight shift and momentum. As the choreographer, Robson provided her own movement notation made up of hand-drawn geometric symbols to her collaborator, cellist and composer Lily Gelfand, to generate a new musical composition for cello. In this piece, Robson and Gelfand perform their two original compositions simultaneously without revision.