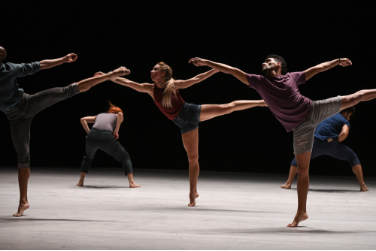 This performance includes instances of haze.

Malpaso Dance Company has over time become Cuba’s most driven and in-demand touring dance troupe, making their American debut at New York’s Joyce Theater in May 2014 and not looking back since. Their place in an emerging modern dance landscape allows them to seek out and commission new work by elite international composers while also challenging their own dancers and choreographers to create pieces of their own. Mixing modern Cuban music with contemporary classical and electronic sounds, they have become, according to The New York Times, “an unfailingly open and generous crew.”

At The Clarice, Malpaso presents three reflections on the ways an individual interacts with the rest of the world. During the gripping “Indomitable Waltz,” by Los Angeles choreographer Aszure Barton, black-clad figures emerge from the dark to dazzle in the light, exploring the emotional range of human relationships by moving in and out of groups of ever-shifting sizes, including solo. “Ocaso,” choreographed by Malpaso cofounder Osnel Delgado, is a duet brazenly set to the sounds of Autechre, Kronos Quartet and Max Richter. An exploration of the ways that two young people in love can animate, support, illuminate and devastate one another, it is familiar and intimate, sexy and sharp. In 2018, legendary Israeli choreographer Ohad Naharin visited Malpaso in Cuba to re-stage his “Tabula Rasa,” premiered more than 30 years earlier to great acclaim. A stirring work about identity and self-discovery, it remains as transformative as the journey it captures.