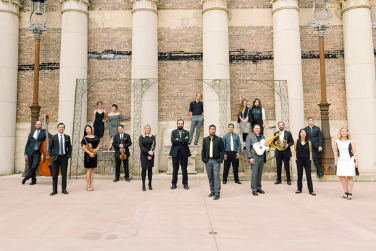 There may only be one legitimate question when it comes to the Chicago contemporary music collective Ensemble Dal Niente: What won’t they do? In less than two decades, they’ve built provocative programs and a striking international reputation by rendering unapologetically difficult music—oftentimes, the sort that other so-called new music ensembles will not or cannot try—with unguarded ardor and commitment. To wit, their expansive repertoire ranges from John Adams to John Cage to John Zorn, from Ashley Fure to Arvo Pärt to arrangements of Radiohead, from members of the rock band Deerhoof to members of the vital Association for the Advancement of Creative Musicians.

Capable of shifting from soloists enacting the most exacting extended techniques to a chamber ensemble of two-dozen members in perfect lockstep, Ensemble Dal Niente has played the work of Georg Friedrich Haas in total darkness and pulled more than 100 works from cutting-edge composers into the light of world premieres. They will fling pianos open to play only their innards, scratch slivers of sound from stringed instruments, and weave dramatic vocal techniques and instrumental leaps of faith into audacious multimedia shows. They are, as The Los Angeles Times has rightly noted, “[bringing] hard-core Modernism up to date.” Ensemble Dal Niente does all this with an unbridled and contagious sense of enthusiasm, so that, even if you are prone to the classic portion of classical music, you glean that there must be something there to discover, to consider, to cherish. They rank among the world’s most capable guides.

Wang Lu: After Some Remarks by CW