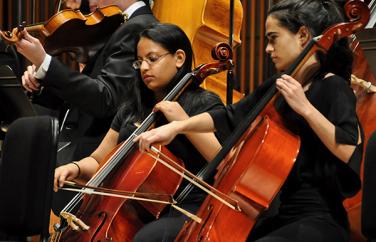 In celebration of Beethoven’s 250th birthday year, UMD Repertoire Orchestra (UMRO) presents his most celebrated composition. Written between 1804 and 1808, Beethoven's fifth symphony is one of the most well-known symphonies ever written. From its iconic fate motif to the triumphant arrival of C major in the last movement, it is not only an exploration into Beethoven’s philosophy as a composer but also represents the historical turning point from the Enlightenment towards the Romantic era. The concert will open with Gioachino Rossini’s captivating Overture to La Gazza Ladra, followed by Antonín Dvořák’s dramatic symphonic poem The Noonday Witch.

Led by Jesse Leong and Yu Wang of the graduate conducting studio, the UMRO is a unique orchestra of musicians from across the campus that performs four full concerts each season. Repertoire varies based on instrumentation and consists of works for both chamber and full orchestra.