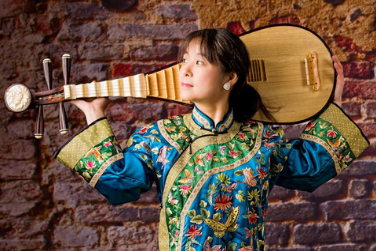 Learn more about the artist

Wu Man, pipa: A Night in the Garden of the Tang Dynasty

Wu Man, the youngest person to ever be accepted into Beijing’s prestigious Central Conservatory of Music, has prodigious talent resulting in a long-term love affair with the pipa, a 24-fret Chinese lute. “Cradling her pipa, Wu Man holds 2,000 years of Chinese history in her hands,” NPR notes. “When her fingers start to fly, she can create scenes of cinematic grandeur or serene, moonlit moments.” Over the years, Man has premiered countless new works to preserve and celebrate China’s ancient musical traditions.

Despite the depth of her formal training, Man is anything but conventional. In 1990, she moved to the United States to extend her repertoire beyond traditional Chinese music, and she has single-handedly brought the pipa into contemporary culture by pairing the melodic, lute-like sounds with avant-jazz and Western string quartets. Over the last two decades, Man has performed and recorded with a stunning array of artists, including the Kronos Quartet and Yo-Yo Ma’s Silk Road Ensemble, while premiering works by Philip Glass, Lou Harrison and Terry Riley. In 2013, she became the first performer of a non-Western instrument to be named “Instrumentalist of the Year” by Musical America and has received six Grammy nominations for her work across more than 40 albums.

In this visit to The Clarice, Man brings together a worldwide ensemble of extraordinary musicians, offering an exhaustively-researched program of music drawn from manuscripts of the Tang dynasty, recreating gorgeous traditional music from the period and placing it alongside a newly commissioned work inspired by the sounds of the period.

Join the artist for a pre-concert talk at 7PM!

Learn more about the artist.