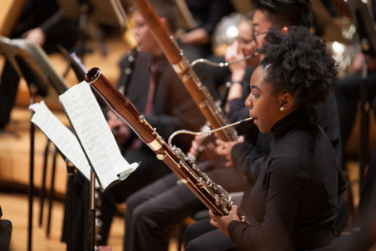 Throughout the history of classical music, women have struggled to find their voice as performers, conductors and particularly composers. Many women composers are best known for their associations with their husbands or brothers such as Clara Schumann, Fanny Mendelssohn and Alma Mahler. Today, we are far closer to reaching gender equity with prolific composers like Jennifer Higdon, Joan Tower, Missy Mazzoli, Libby Larsen, Julia Wolfe, Unsuk Chin and so many more. Still, major American orchestras feature music by women in at most 10% of their seasons and as little as literally none.

With Their Time Has Come, we hope to pay homage to women in the 19th and early 20th centuries who helped to pave the way for the women of today. Lily Boulanger was best known as the younger sister of Nadia Boulanger, renowned composer and teacher. D'un soir triste (A Sad Evening) is one of the last works she completed before she tragically died at age 24. The popular Flute Concertino by Cécile Chaminade will feature graduate students David Le on flute and Yu Wang as the conductor. The masterful Symphony No. 1 by Florence Price was the first piece composed by an African-American woman to be played by a major American orchestra; it was premiered by the Chicago Symphony Orchestra in 1933.

Led by Music Director Jesse Leong and Assistant Conductor Yu Wang of the graduate conducting studio, UMD Repertoire Orchestra (UMRO) is a unique orchestra of musicians from across the campus that performs four full concerts each season. UMRO is open to music majors, non-music majors, UMD faculty and staff and members of the UMD community. Repertoire varies based on instrumentation and consists of works for both chamber and full orchestra.