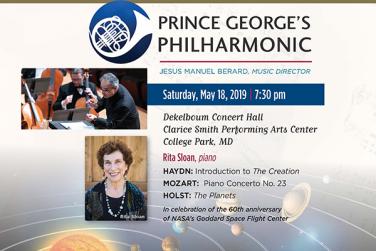 Jesus Manuel Berard and the orchestra will be joined by pianist Rita Sloan in a performance of Mozart’s Piano Concerto No. 23. The featured work will be Gustav Holst’s “The Planets,” in celebration of the 60th anniversary of the establishment of NASA’s Goddard Space Flight Center in Prince George’s County. The performance will be accompanied by a multimedia show of dramatic images provided by NASA. The program opens with the Introduction to Haydn’s “Creation.”

Goddard Space Flight Center exhibits will be set up in the lobby of The Clarice, to be visited by audience members from 6:00 to 7:20 p.m. and during intermission.