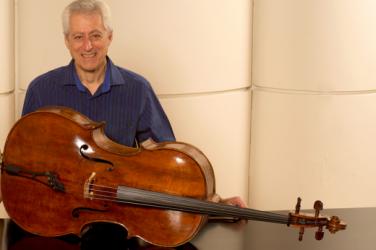 Professor of cello and chamber music at East Carolina University, Emanuel Gruber will perform three of J.S. Bach’s beautiful Six Suites for Cello—No. 1, 3 and 5. Widely performed, these suites for solo cello are considered to be among Bach’s greatest works and feature movements based on dances from the Baroque period. Gruber is celebrated as a soloist, chamber musician, recording artist and teacher. Awarded the Pablo Casals Prize by the Philharmonic Orchestra, he also won the Concert Artists’ Guild Auditions early in his career. He has been principal cellist of the Israel Chamber Orchestra and co-principal of the Los Angeles Chamber Orchestra. He was a member of Sequoia Quartet, Camerata Trio, Tel Aviv Piano Quartet and leader of the Israel Cello Ensemble.