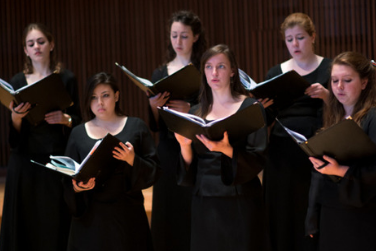 Five choirs, brass quintet and organ bring the joy of the holiday season to life with carols, hymns and spoken word that epitomize hope and goodwill. Program highlights include Benjamin Britten's Chorale After an Old French Carol, Levente Gyöngyösi's Gloria Kajoniesis with guest violinists James Stern and Myles Mocarski and an arrangement by S. Hatfield of Un flambeau, Jeannette, Isabelle, which originated from the Provence region of France in the 17th century. Then sing along to the beloved David Willcocks carols.

On the day of the performance, tickets will be available only at the UMD Memorial Chapel beginning at 7PM.