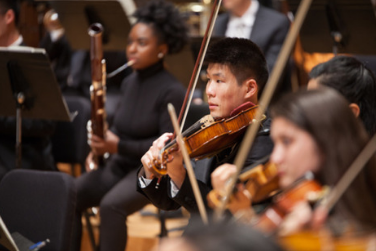 Conductor David Neely makes his debut as the UMD Symphony Orchestra's (UMSO) new music director with Antonín Dvořák's cheerful Symphony No. 8. The concert will also feature Jennifer Higdon's blue cathedral, a cathartic and uplifting work the American composer wrote in memory of her younger brother, and Overture No. 3 from Ludwig van Beethoven’s only opera, Leonore, later known as Fidelio.

Join the conductor for a free pre-concert discussion at 7pm.

Read the Q&A with the conductor.

UMSO showcases the orchestral program with uncompromising attention to musical excellence. It pushes the boundaries of the orchestral experience and presents innovative and electrifying performances of orchestral repertoire both modern and classic.