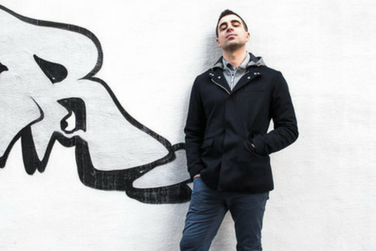 Particle Collider is a quartet that slowly evolves out of a single, simple germinating idea: a repeated quarter note D (the “particle” of the title) that slowly trembles and pops and throws off notes in either direction, including “out of tune” quarter tones and almost pitchless rhythmic beating with the wooden end of the bows. This mechanical quarter note slowly deteriorates into further small bits of a musical mosaic. The instruments each play short rhythmic ideas that are plucked, bowed and struck and that combine into a steady, jazz-influenced rhythmic groove punctuated eventually by a sliding, searching melody.

Eventually these short rhythmic granules elongate into glassy held tones that spin out a melancholy melody that forms the emotional heart of the piece. Eventually, like our quarter-note D, this too begins to overheat and we find ourselves back in the rhythmic mosaic of the first half, but now with the coopted dark melody carrying on over the background groove, climbing higher and higher until each instrument in the quartet is playing at its extreme register.

Crashing back down to Earth, the quartet ends up back where it began on the quarter-note D, like an atom that has traversed the circular path of a particle accelerator and we are played out in a slowly decaying, bluesy vamp.

About Nathan Lincoln de Cusatis (DMA Composition)
Nathan Lincoln de Cusatis is a jazz and classical composer based in New York City. His music encompasses a wide variety of media and styles including his jazz piano trio MOB RULE, the 10-piece improvising ensemble Micro-Orchestra, and classical pieces for orchestra, sinfonietta and chamber ensembles. His music has been described in the Washington Post as “a kind of kaleidoscope…each moment bringing a shift in the harmonic feel and flow, from jazzy licks to piled-up counterpoint to independent chords.” All About Jazz calls him “a musician that has absorbed the stylistic vocabularies of the greats and distilled them into his own personal approach both muscular and lyrical.”

Nathan holds degrees in composition from Ithaca College (BM) and the University of Maryland (DMA). He currently serves as Assistant Professor of Music at Fordham University where he teaches classes in music theory, jazz, and music production.

This event is part of NextNOW Fest 2018