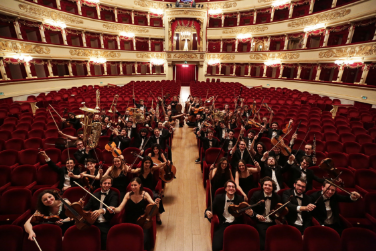 IVÁN FISCHER is the founder and Music Director of the Budapest Festival Orchestra. He is also the Music Director of Berlin's Konzerthaus and Konzerthausorchester. From 2018 he will be the Artistic Director of the Vicenza Opera Festival. In recent years he has also gained reputation as a composer, with his works being performed in the United States, the Netherlands, Belgium, Hungary, Germany and Austria. Iván Fischer has directed a number of successful opera productions. His “staged concerts” have been performed in Budapest, New York, Berlin, Amsterdam, London, Bruges and in the Abu Dhabi and Edinburgh Festivals. The BFO’s frequent worldwide tours, and a series of critically-acclaimed records released first by Philips Classics and later by Channel Classics, have contributed to Iván Fischer’s reputation as one of the world’s most visionary music directors. The Berlin Philharmonic has played more than ten times under Fischer’s baton, and he also spends two weeks every year with Amsterdam’s Royal Concertgebouw Orchestra. He is also a frequent guest of the leading US symphony orchestras, including the New York Philharmonic and the Cleveland Orchestra. As a Music Director, he has led the Kent Opera and the Opéra National de Lyon, and was Principal Conductor of the National Symphony Orchestra in Washington DC. Many of his recordings have been awarded prestigious international prizes. He studied piano, violin, and later the cello and composition in Budapest, before continuing his education in Vienna and Salzburg where he studied conducting under Hans Swarowsky and Nikolaus Harnoncourt. Iván Fischer is a founder of the Hungarian Mahler Society and Patron of the British Kodály Academy. He has received the Golden Medal Award from the President of the Republic of Hungary, and the Crystal Award from the World Economic Forum for his services in promoting international cultural relations. The government of the French Republic made him Chevalier des Arts et des Lettres. In 2006 he was honored with the Kossuth Prize, Hungary’s most prestigious arts award. In 2011 he received the Royal Philharmonic Society Music Award, Hungary’s Prima Primissima Prize and the Dutch Ovatie Prize. In 2013 he was accorded Honorary Membership to the Royal Academy of Music in London. In 2015, he was presented with the Abu Dhabi Festival Award for Lifetime Achievement, and in 2016 he won the Association of Music Critics of Argentina’s award for Best Foreign Conductor.

ACCADEMIA TEATRO ALLA SCALA ORCHESTRA
Accademia Teatro alla Scala is one of the world's foremost institutions in training for the full range of performing arts professionals, from artists to technicians and managers. Chaired by Alexander Pereira and managed by Luisa Vinci, the Academy boasts the finest instructors from Teatro alla Scala and the collaboration of preeminent experts in the field, all sharing the objective of transmitting the theatre’s inestimable cultural heritage and universally recognized artistic tradition to the coming generations. The curriculum comprises four departments – Music, Dance, Stage Workshops, Management – with some thirty courses and over one thousand six hundred students from every corner of the world: 800 students in professional courses and 800 in beginning courses, seminars and internships. The teaching method is based on direct real-world experience, an intensive internship program, and "on-the-job" training: concerts, performances, exhibitions, and the Academy Project, an annual feature in the La Scala season program, constitute the proving grounds for all Accademia students both in and outside of Italy. The La Scala Academy Orchestra is currently the only institution providing training across the entire orchestra repertoire: symphonies, operas, and ballets. Under the guidance of acclaimed musicians and the first chairs of the Teatro alla Scala Orchestra, the two-year curriculum provides individual training in the chosen instrument and ensemble lessons in chamber music, orchestra sections, and full orchestra exercises. The Academy Orchestra performs at famous theatres, concert societies, and international festivals. The more notable venues include Teatro alla Scala, the Bolshoi Theatre in Moscow, the St. Petersburg Philharmonia, the Royal Opera House in Muscat, La Fenice of Venice, Teatro Massimo of Palermo, Teatro San Carlo in Naples, Teatro Petruzzelli in Bari, Teatro Bellini of Catania, the RAI Auditorium in Turin, the Ravello Festival, the Kissinger Sommer Festival and Wolfegger Festspiele. Over its history, the Orchestra has been led by a long list of preeminent conductors: Yuri Temirkanov, Zubin Mehta, Fabio Luisi, Ádám Fischer, Christoph Eschenbach, Vladimir Fedoseyev, Manfred Honeck, Roland Böer, Michele Mariotti, Gustavo Dudamel, Gianandrea Noseda, Stefano Ranzani, Ottavio Dantone, Giovanni Antonini, John Axelrod, Susanna Mälkki, Pietro Mianiti, Daniele Rustioni, David Coleman, Mikhail Tatarnikov, and Lorenzo Viotti. It has also accompanied soloists of the caliber of Lang Lang, Herbie Hancock, Alexei Volodin, Simon Trpčeski, David Fray, Olga Kern and Alessandro Taverna.