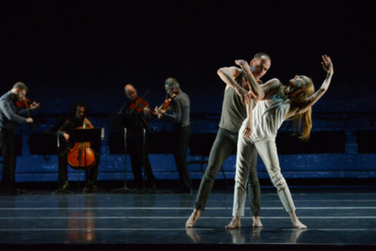 Choreographer Brian Brooks, beloved for his “kinetic thrill and visual power” (The Washington Post), collaborates with Wendy Whelan to bring an elegant and electric ballet-inflected contemporary work to the stage. Whelan is known for her striking physicality and capacity for reinvention. Her career spans 30 years in the New York City ballet, with 23 of them as the principal ballerina. During that time, she danced virtually all the major Balanchine roles, and worked closely with Jerome Robbins on many of his ballets, as well as originating roles by such notable choreographers as William Forsythe, Twyla Tharp, Alexei Ratmansky, Christopher Wheeldon, Jorma Elo, Shen Wei and Wayne MacGregor. Brooks is the recipient a Guggenheim Fellowship, a NY City Center Fellowship, the Jerome Robbins New Essential Works grant, and the Joyce Theater’s Artist Residency, among other honors.

The evening includes the pair’s lauded duet First Fall, as well as four other sections, all of which bring music to the foreground as a dynamic and creative component. Live musical accompaniment will be provided by noted string quartet Brooklyn Rider.

Wendy Whelan speaks about the challenge of aging gracefully in the dance world in the documentary, Restless Creature.  For more information about aging in the dance world, consider dancer/writer Wendy Perron's article Aging Dancers: An Alternate Vision.

The presentation of Wendy Whelan/Brian Brooks/Brooklyn Rider's Some of A Thousand Words was was made possible with generous support from LUMBERYARD Contemporary Performing Arts (formerly American Dance Institute)” and supported in part by the National Endowment for the Arts.

Join us for a conversation with Wendy Whelan and Brian Brooks after the performance.