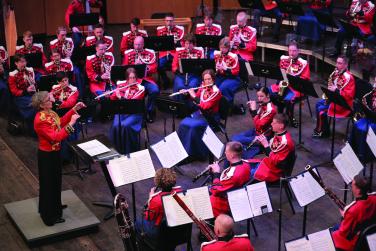 “The President’s Own” United States Marine Band performs a concert titled “Wanderers,” conducted by Major Michelle A. Rakers. The performance will feature music that was created out of personal journeys, whether those journeys were metaphorically through one’s own creative development or in the literal sense of actual traveling. Highlights include John Philip Sousa’s The Grand Promenade at the White House (Coronation March) from Tales of a Traveler, Scott Lindroth’s Passage, Ottorino Respighi’s The Pines of Rome, and a Charles Ives Song Set.