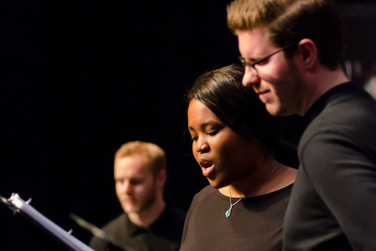 The TDPS New Play Workshop Kickoff is a panel discussion for anyone who has interest in working on a new play - now or in the future, in any capacity. It features a panel of top DMV-area theatre professionals: director JoJo Gruenhut, dramaturg Otis Ramsey-Zoe, actor Thembi Duncan and playwright Gwydion Suleibahn. These panelists will have a rich conversation about how a playwright, director, dramaturg and actors can most fruitfully collaborate on the development of a new play.

The panel will address many questions, including:

The event will be moderated by Professor Jennifer Barclay, and we will invite questions from the audience.

Johanna (JoJo) Gruenhut is the Artistic Associate at Everyman Theatre in Baltimore, MD, where she produces a monthly Salon Reading Series, dedicated to female playwrights. Most recently, she directed Jen Silverman's The Roommate (Everyman). Next month she begins rehearsals for That Face, which will inaugurate Center Stage's new theater.

Otis Cortez Ramsey-Zöe is a Lecturer of Theatre Arts at Howard University, Series Editor for NoPassport Press’s Dreaming the Americas Series, and freelance dramaturg. He has developed new works at such organization as Sundance Institute, National New Play Network, Kennedy Center, Classical Theatre of Harlem, Arena Stage, and Theatre J. Current projects include Production Dramaturg for Hooded or Being Black for Dummies, The Blood Knot, and A Human Being Died That Night at Mosaic Theater Company.

Thembi Duncan is a director, playwright, and teaching artist who serves as the Creative Programs Director at Young Playwrights' Theater. She is also the co-founder of the Black Theatre Symposium with UMD Theatre Professor Scot Reese, and the former Producing Artistic Director of African Continuum Theatre Company. Her areas of interest are race, gender, youth development, and American history.

Gwydion Suilebhan is a playwright, performer, and advocate whose plays have been commissioned, produced, and developed by Centerstage, Ensemble Studio Theatre, NNPN, Gulfshore Playhouse, Forum Theatre, Theater J and Theater Alliance, among others. He currently serves as Director of Brand and Marketing for Woolly Mammoth and Project Director of the New Play Exchange for NNPN. A co-founder of The Welders, Gwydion also served as DC’s representative to the Dramatists Guild for six years.