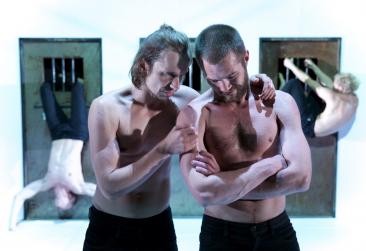 What happens when you’re declared an enemy of the state simply for making art? Where do you belong when your government suppresses your basic right to expression? And how do you survive in one of the most brutal prison systems in the world?

Featuring Pussy Riot's Maria Alyokhina in her stage debut, this blazing new contemporary theatre piece from the refugee-led Belarus Free Theater (BFT) draws on the company’s own experience of political oppression and continues their campaign to stand up for artistic freedom and human rights across the globe. BFT is the only theatre in Europe banned by its government on political grounds. It shares stories of persecuted artists, living under dictatorship, who will not be silenced.

Performed in Russian and Belarusian with English surtitles. Please note, this performance contains nudity, adult language and scenes of a violent nature. Recommended for mature audiences.

The Belarus Free Theater participates in ongoing campaigns to fight the suppression of their freedom of speech, and bring to light the backlash they face for expressing themselves. Their {I’m With The Banned} campaign demands the release of the Kremlin hostages and political prisoner Oleg Sentsov.

Recently, company members were arrested protesting. They are asking for their supporters to stand with them by watching this video, spreading the world know what is happening there, and participating in their social media awareness campaigns.

Come and discuss hardship, resistance and art with Belarus Free Theatre and other leading artists in "Burning to Tell You: Critical Conversations with Risk Taking Artists" on October 28, 2017 at 10:30 AM at The National Press Club

Encore Bar will be open for all performances. The bar opens 45 minutes before the performance and drinks must be consumed in the lobby.

Burning to Tell You: Critical Conversations with Risk Taking Artists