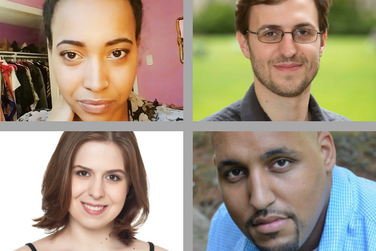 Ann Fraistat is a DC-based playwright, director and actor. Her plays, co-authored with her brother, include Romeo & Juliet: Choose Your Own Ending. The show, the 2010 winner of Best Comedy and Best Overall Show at Capital Fringe, has been performed throughout the United States and in Canada. Fraistat’s other works have been performed with DC-area companies including The Impressionable Players, Pointless Theatre Co., Pinky Swear Productions and Rorschach Theatre—and overseas by Etcetera Theatre in the London Horror Festival. Fraistat is proud to serve as an Ambassador to the Dramatists Guild and is an originating producer for the annual New Play Workshopfor student playwrights in the UMD School of Theatre, Dance, and Performance Studies.

Shawn Fraistat, a 2005 alumnus, has co-authored several comedies with his sister. Published works include Romeo & Juliet: Choose Your Own, Pandora: A Tragicomic Greek Romp (2011) and Detective Pimbley and the Case of the Rich Dead Lady (2013), which debuted at the Capital Fringe Festival. Performed short works include The Wife of Bath’s Tale in Pointless Theatre’s production of Canterbury; Josie, June, and Death in Pinky Swear Productions’ Tiny House Plays (2014); and The Invisible Man in Rorschach Theatre’s Haunting Monsters (2014), and at the London Horror Festival.

Moyenda Kulemeka is a theatre artist based in Washington DC. Moyenda works primarily as a costume designer, though she has served as a director for UMD's 2017 New Play Workshop, and a playwright for the 4th annual DC One-Minute Play Festival. Moyenda holds a B.A. in Theatre from UMD where she designed costumes for The Odd Couple (which she also directed), Ghetto Symphony, Stop Kiss, and Macbeth among others. Moyenda also assisted with costumes for the U.S. premiere of In The Heights - En Español (GALA Hispanic Theatre), A Midsummer Night's Dream (ACA - Shakespeare Theatre Co.), Urinetown (Constellation Theatre Co.), and Irving Berlin: A Simple Melody (The In Series) to name a few. Her upcoming costume design work will be featured in We Happy Few's production of Dog in the Manger, as well as in GALA Hispanic Theatre's La Foto. As a playwright, Moyenda likes to focus on stories with complex female characters of color. Her goal is to bring to life the stories of those often marginalized within society and within theatre, in order to expand the narratives of the human experience.

James Nelson is thrilled to make is professional writing debut at the NextNOW Fest. James most recently wrote Dreenie for the New Playwrights Workshop in 2017 at UMD. He has spent most of his theatre and academic journey acting and directing. His UMD credits include The Schooling of Bento Bonchev (as Frank); Blood Memory (as Terrence); Ghetto Symphony (as Officer Darren); for colored folks… (as brother #5); The Call (asst. Director); Troilus and Cressida (asst. Director). Mr. Nelson has also collaborated with the Kennedy Center for their New Visions/New Voices program as an assistant director, Montgomery College’s Summer Dinner theatre as an assistant Director and Montgomery College’s regular season as an assistant director. Other credits include: Les Miserables (ensemble); Reckless (as Lloyd); Elliot, A Soldier’s Fugue (as Pop); Big Love (as Uncle Pierro); Dog Sees God (as Matt); and The Last Days of Judas Iscariot (as Pontius Pilate). He will be making is professional acting debut in the fall at the Highwood Theatre as Crumb in the production Duck by Tom Block. James would like to give special thanks to Jennifer Barclay for her leadership and outstanding example as a thespian and person.

This event is part of NextNOW Fest 2017.