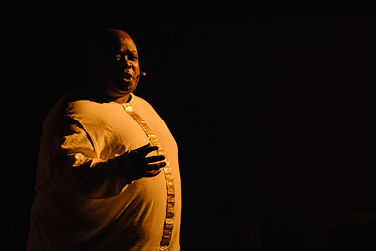 What if a man, struggling against being mechanical, could not accept his son as anything but a machine? Sent from a dying earth, General Ebon Kojo and Ra-7 have been ordered to “recolor” the distant and barren planet Beta-5. Upon their arrival to Beta-5, Ebon and Ra are confronted with unprecedented realities that transform them both.

In this one-man show, pianist and composer Scott Patterson uses acoustic piano, synth keyboards and sound design to weave together a story of space exploration, environmentalism, father-son relationships and social greed. Inspired by the music of Sun Ra and his film Space is the Place,Christina De Middel’s photobook Afronauts and Frances Bodomo’s film of the same name, Patterson imagines his own futuristic world, where sound and music bend the laws of physics and become instruments of creation and destruction.

Pay what you wish, no tickets required.