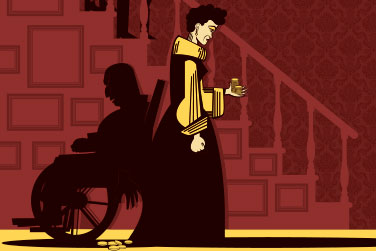 No less a musical force than Leonard Bernstein deemed Marc Blitzstein’s Regina the first great American opera.  He proposed that a production of it at La Scala should be Europe’s introduction to America’s achievement in the art form. Though championed by the foremost musicians and dramatists of its day, Regina had a troubled premiere on Broadway. Subsequent productions in opera houses fared somewhat better, but the complex nature of its score led it gradually to fall into neglect.  Regina places unusual demands on the acting skills of the singers, and the complex relationship between its music and spoken dialogue have left it in limbo:  too challenging dramatically for opera companies, too demanding musically for theatre companies.

Based on Lillian Hellman’s The Little Foxes, the opera tells the sordid tale of a grasping mercantile family in 1900 Alabama.  Personal greed, familial rivalries, and simmering resentments build to a lethal climax as each member of the family struggles to come out on top. Blitzstein’s soaring score draws on multiple musical sources:  operatic arias, ragtime dances, gospel spirituals, and vaudeville ditties.  The result is a musical drama as eclectic and as powerful as America itself.

This performance is funded in part by the Kurt Weill Foundation for Music, Inc., New York, NY

Regina: All Hail the Queen!

This blog post is by Chelsey McLaughlin, a senior theatre major.

From balcony seat 20, row AA, I have an aerial view into the orchestra and of the red velvet curtain which currently covers the stage. A soft, chaotic jumble of music notes fills the dimly lit theatre...

Opera Resonates!: Regina: Is It All Black and White?