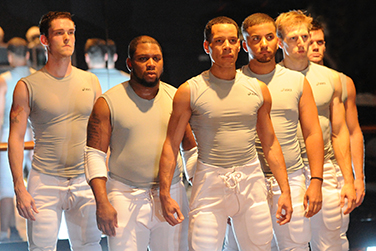 WAPAVA will show a video recording of the Olney Theatre Center’s live performance of Colossal and host a panel discussion with production participants and Dr. Faedra Chatard Carpenter as the moderator.

Colossal, written by Andrew Hinderaker and directed by Will Davis, is an extraordinary story of emotional and physical endurance, love, and family. Structured like a football game (performed in four quarters with a pre-show training session and half-time show), Colossal tells in vivid, physical flashback the story of Young Mike, a college football player who took a hit in a game that left him paralyzed from the waist down. Mike now relives the memory of his accident with the help of a live football squad onstage, finally confronting his demons in the play’s extremely powerful and uplifting conclusion. Featuring Michael Patrick Thornton, star of ABC's Grey's Anatomy spin-off Private Practice. Winner of the Kennedy Center’s Jean Kennedy Smith Playwriting Award. (Recommended for ages 14 and up)

Colossal is a 2014 production and the recipient of a 2014 Edgerton Foundation New American Plays award. It also won 4 Helen Hayes awards among its 6 nominations: