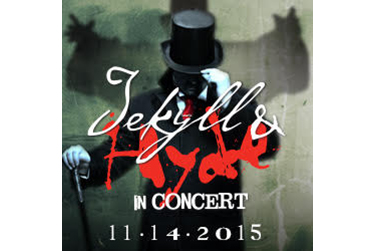 Young Artists of America at Strathmore (YAA) is the region’s premier training organization for young collaborative performing artists. It is the only known program in the nation where students receive mentorship and individualized instruction from renowned artists while training to perform fully-orchestrated works of music-theatre in state-of-the-art venues. Young Artists of America at Strathmore’s goal is to provide gifted and committed students unique performance and educational opportunities in a professional, nurturing and collaborative environment.

Murder and chaos are pitted against love and virtue in this sweeping, gothic musical.

A devoted man of science, Dr. Henry Jekyll is driven to find a chemical breakthrough that can solve some of mankind's most challenging medical dilemmas. Rebuffed by the powers that be, he decides to make himself the subject of his own experimental treatments, accidentally unleashing his inner demons along with the man the world would come to know as Mr. Hyde.

Jekyll & Hyde made its Broadway debut on April 28, 1997 at the Plymouth Theatre. It ran for nearly four years, eventually closing on January 7, 2001 after 1,543 performances.

”What makes a standout performance that leaves the audience gushing long after leaving the theater? Young Artists of America at Strathmore seems to have hit upon the perfect recipe – invite a myriad of local groups for creative collaboration, assemble nearly 200 talented student musicians, welcome two opera professionals, some 30 accomplished young adult singers and guide the entire process through the outstanding mentorship and baton of YAA’s artistic leadership. The result—a performance to remember. Given that the recent West Side Story + Roméo et Juliette was a single performance, area theater lovers should pre-order tickets now for the next event in fear that they might miss the next magical installment.”

Connect with Young Artists of America on social media