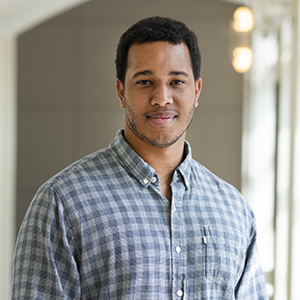 My name is Jalen Eutsey and I’m a poet. I earned a Bachelor of Arts in English from the University of Miami and a Master of Fine Arts degree in Poetry from Johns Hopkins. I was born and raised in Miami, Florida and played sports competitively from age six to twenty-three. I will be carrying out the role of embedded journalist during the Clarice Smith Performing Arts Center’s 2019 National Orchestral Institute + Festival. I am in the process of completing my internship placement at the Clarice as a part of my ten-month Urban Arts Leadership fellowship. Urban Arts Leadership is a fellowship program of the Greater Baltimore Cultural Alliance, designed to increase diversity in the management of cultural and artistic organizations by building a pipeline for high-achieving, emerging leaders, focusing on those of color.

It is essential that I start this National Orchestral Institute + Festival write-up with a disclaimer: I know next to nothing about chamber and orchestral music. So how, you may be wondering, could someone so uninitiated write a respectable review of a musical genre they know so little about?

I’m invariably going to end up making comparisons to hip-hop. It would be erroneous to suggest that I KNOW any genre of music, but I know hip-hop music the best. I grew up listening to a variety of artists, dependent on whether I was in my mother or father’s car. In my mom’s black, Nissan Altima, we listened to country and old-school r&b. To this day, “The Devil Went Down to Georgia” is my most reliable karaoke choice. In my dad’s red, Ford F-150, when we weren’t listening to sports-talk radio, we were listening to albums on CD by Eminem, Tupac, Nelly, Prince, The Ohio Players, and Parliament-Funkadelic. Since then I’ve mostly subsisted on a small selection of rappers and r&b acts, oftentimes only at the peak of their powers. I know the hits from a broader base of artists, but my list of go-to acts would include Ludacris, Lupe Fiasco, Lil-Wayne, 50 Cent, Kanye West, Drake, Kendrick Lamar, J. Cole, Chance The Rapper, Earl Sweatshirt, Frank Ocean, and Vince Staples. I know what you’re thinking: we get it you’re a millennial, now get to the point.

I say all that to emphasize, upfront, that I’m bringing a significantly outside perspective to an oft-insulated musical genre. There is a galaxy-sized gulf between what I know about chamber music and what someone like Alex Ross—one of the preeminent American music critics and a current classical music critic for The New Yorker— knows about chamber music. It doesn’t do anyone any good for me to attempt to re-create an Alex Ross’ style critique. I suspect that my reviews will fall more in line with the work of a writer like Hanif Abdurraqib, whose essays on popular music and culture, blend personal narrative with incisive analysis. As a poet, I want to get to the root of the matter at hand.

The only way I know how to connect with you, the reader, and provide you with a perspective that no one else can, is to foreground the emotions and associations NOI stirs up for me. I will certainly take the time to research the work and speak to all the relevant facts surrounding the music, but that’s not all I’m going to do. It can’t be. These essays will reckon with the historical lack of minority representation in and around classical music; they will consider what it means for me, a young black man, to exist in these predominately white spaces. I will highlight my individual relationship to classical music and the ways in which race and culture have influenced that relationship. I’ll make every effort to highlight and question my own biases with rigor and thoughtfulness, bringing them in conversation with the biases that unavoidably follow black and brown bodies around today. I hope that you’ll be willing to follow my digressions and discursions, my allusions to pop culture, popular music, and the focus on my own lived experiences rather than an objective critique— I’m a poet after all.

There’s a Robert Frost quote that comes to mind as I prepare to write these reflections on NOI: “No tears in the writer, no tears in the reader. No surprise in the writer, no surprise in the reader.” This sort of surprise is an inherent part of poetry, where language is elevated to its ultimate height, where line breaks and associative thinking are used to jump from one image or idea to the next, one thing unfurling inside and around every other thing all at once—a pale lizard, curled up like a small moon inside of a rose. Stumbling into a coherent, poignant thesis in prose, can also be an act of surprise and discovery. Hopefully, through hard work, good intentions, and maybe even a few tears, we can all surprise ourselves at the end of this effort.

This season, The Clarice has hosted writer Jalen Eutsey as part Greater Baltimore Cultural Alliance's Urban Arts Leadership Fellowship. This prestigious fellowship is aimed at diversifying the management of cultural and artistic organizations. Throughout June 2019, Eutsey will be writing about the National Orchestral Institute + Festival. He'll examine NOI+F's performances, rehearsals and engagement events with an eye towards equity and inclusion.

Eutsey holds a Bachelor of Arts degree in English from the University of Miami and a Master of Fine Arts degree in Poetry from Johns Hopkins University. His poems have been published in Miscellany, Mr. Ma’am, The Rush, Into the Void and Northern Virginia Review. While in graduate school, he taught creative writing to high school and middle school students as part of the Writers in Baltimore Schools program.