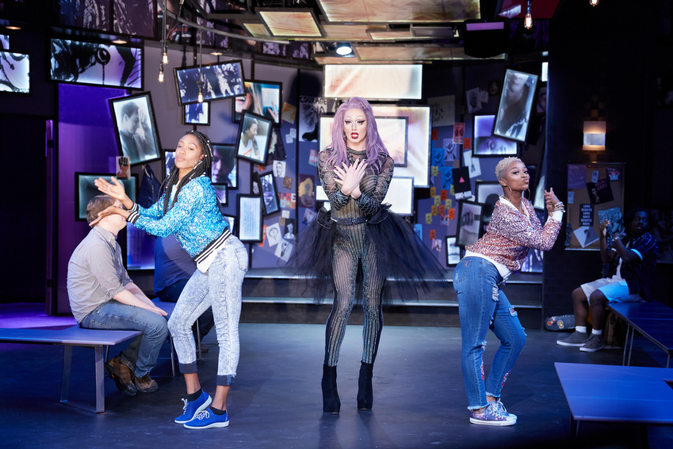 We sat down with some of the cast members from UMD TDPS’s Clove who bring their unique talent and perspective to the show, and today we highlight Junior theatre major,  Gabrys Wronka. Gabrys’ character, Grayson, is an RA who plays with the rules of gender, showing up to RA meetings in drag as “Venus.” Gabrys himself inspired this character, showing up to his callback audition in 10-inch stilettos. He says it was “a dream come true” to then be asked to play a drag queen in the show.

Gabrys channels his personal struggles with society-imposed gender rules during the moving dance number, “Stages of Grief,” in which Venus “de-drags,” removing her makeup, wig and shoes onstage. He credits director, Paige Hernandez, with the ability to welcome everyone’s personal stories and weave them into one cohesive voice. “She’s amazing,” he says of  Paige, also describing her as smart, talented, charismatic and fun.

Gabrys is hoping to create a welcoming space for all audience members as well as educate those who may not be exposed to topics addressed in the show saying, “We know that there are a lot of people who aren’t used to these kinds of things, and we want people to know, we’re ok with that, we just want to teach people, and let them have an open heart to these kind of things.”

Bravo Gabrys! We love seeing you rock the stage!