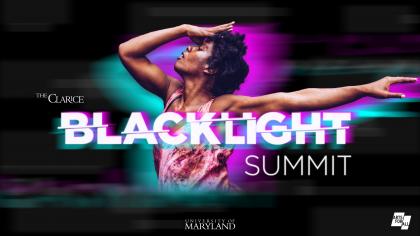 This event will also be livestreamed on Friday, February 4. For more information, click here.

About the BlackLight Summit

The Clarice’s BlackLight Summit aims to activate the unimagined possibilities in dance–it is a convening that envisions dance as a conduit to galvanize resilience and inventiveness. Returning for a second year, the 2022 summit explores three fundamental inquiries: “What/who are we becoming?” “How do we return to one another?” and “Does progress equal healing?” Throughout the 2021–22 season, the BlackLight Summit will continue to foster community connection by facilitating a series of mentoring and professional development opportunities, conversations and performances.

Process memoir 7 (Vol.4): an attempt to study and embrace the Holy Spirit

“My dad once told me to never forget the feeling of catching the holy ghost. He said, “It will bring you clarity”. I swore to him that I wouldn’t forget. This study, this shared moment, leans into my family’s practice of calling upon this non-earthly entity, as I both combat the external falsities of this world, and seek truth from the boundless possibility of another.”

Part movement study, part archival revisitation, this volume of PM7 glitches into material developed in 2019’s Process memoir 4: The word, the spirit, and Little Rock. A three night radical risk ritual which was later crafted into a film, the process memoir was presented by Danspace Project Inc. at St. Mark's Church in the Bowery on a split bill with Angie Pittman.

An attempt to study and embrace the Holy Spirit is the fourth formally presented volume within Process memoir 7: Volumes on Black Philosophy, Othered Possibility, and Freedom (through Rest, Unrestricted Thought thus Imagination). The seventh process memoir in Johnnie Cruise Mercer/TheREDprojectNYC's current six year anthology project–"A Process Anthology: The Decade from Hell and the Decade that Followed Suite," PM7 activates itself as a series of facilitated experiments, events, curations, retreats and collaborative projects commissioned to ignite collaboration within the TRPNYC network. Unlike other process memoirs, this chapter of the process anthology renders its goals completely outside of the context of performing; embracing alternate ways to view, produce and take on work.

This study was made possible with support from Abrons Arts Center through the AIRspace (2018) Grant Residency Program, the Cuny Dance Initiative as resident artists at York College, as well as with support from RestorationARTS Choreoquest AIR 2018. The process was furthered while in residence support at Bates Dance Festival and during the inaugural residency season of the Stephen Petronio Partnership Residency Program (a collaboration between NYDanceForce and Danspace Project Inc. PM7 (Vol. 4) was made possible with support from The Princess Grace Foundation USA, and through the 2022 Artist in Residence Program at Center Performance Research.

Commercial images promise status, offer solutions to inadequacy and breed entitlement. Internalized deficiency has created a culture of resentment. Suck It Up: a duet confronting the violent fallout of male insecurity and entitlement.

I Think You Should Leave

It’s about to get ugly. And we’ve been here before. From prayer to plead. Through hope, to desperation. It’s a cycle that ends only to begin, leading right back to the precipice. And then again.

To Dream A Lifetime

This is a solo creation dreaming for a character in a future feature film. She is being returned back to the land, possibly home, or place that could have roots in erased lineage. Ancestors, ghost run around her as she sees memories, spaces of the past and her own life. What if she can tap into a power of those before her, the same feeling that could be depleting if not used, and she pushes outwards what she has been holding in her whole life? Inspired by film projections, scenic ideas meeting a real person in front of us–surreal and intimate.