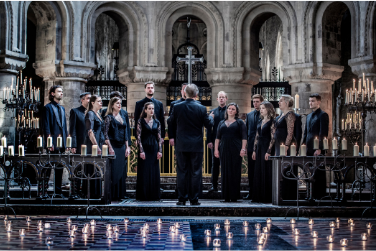 If angels exist, they sound exactly like the 17-voice Tenebrae. Tenebrae has become one of the world’s leading vocal ensembles. Renowned for fusing a flawless mix of classics with modern harmony, the choir is as comfortable singing highly acclaimed interpretations of Renaissance pieces as they are captivating new commissions. With unrivaled dynamic range and a knack for musical nuance, Tenebrae’s performances are an odyssey of the voice. In concert, “Tenebrae [is] special,” raves The Guardian. “These [are] exemplary performances, lucid, and so commanding it seems as if singing perfectly in tune was the most natural thing in the world.”

In this performance presented in the pristine acoustics of St. Andrew’s Episcopal Church in College Park, Tenebrae celebrates 20th century English choral music, particularly the work of prolific poet and composer Ivor Gurney. Gurney was often considered one of the most promising young composers of his generation, but a lifelong battle with mental illness resulted in up to two-thirds of his output going overlooked and unpublished. This program celebrates a recently recovered motet for double choir, Since I Believe in God the Father Almighty, which was written in 1925, just a few years before Gurney stopped composing. It is an arresting testament to freedom and fear, delivered through cascading harmonies that melt into extended silence. Tenebrae also performs works by Gurney’s contemporaries and a piece commissioned by the group in 2013, Judith Bingham’s “A Walk with Ivor Gurney,” which sets a poem by Gurney to mezzo soprano solo and choir. They close with Herbert Howells’ heart-rending “Requiem,” an extraordinary example of English choral music of the period, sure to showcase the ensemble’s impeccable precision, always in service to their musicality.

Ivor Gurney: Since I believe in God the Father Almighty

Hubert Parry: At the round earth’s imagined corners

This concert is currently sold out. To be added to the waitlist if additional ticket become available, please email tickets-theclarice@umd.edu.