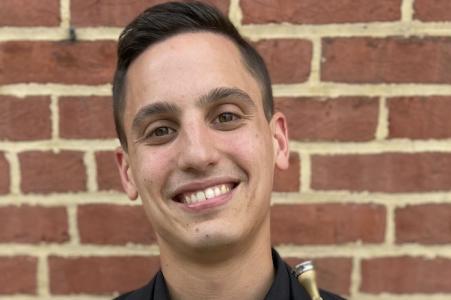 Austin Sposato is the Artistic Planning Coordinator, Music at The Clarice Smith Performing Arts Center where he has worked since 2020. At The Clarice, Austin provides curatorial, artistic and administrative support for the National Orchestral Institute + Festival and the Visiting Artist Series focusing on jazz, classical and contemporary chamber music.

An active performing musician, Austin is the 2nd horn of the Westmoreland Symphony (Greensburg, PA), a founding member of Anima Brass and a freelancer in the DMV area. He has also performed with The Brass Roots, Resonance Works Pittsburgh, the South Florida Symphony Orchestra, Video Game Orchestra, Nassau Pops Orchestra and the Three Village Chamber Ensemble. As an educator he has taught undergraduate major lessons at the University of Maryland School of Music, served as a sectional coach for Maryland Classic Youth Orchestras and given masterclasses at Frostburg State University.

In 2018 he was a fellow at the National Orchestral Institute in College Park, Maryland. He recorded an album of American music for the NAXOS label with the NOI Philharmonic and can be heard as principal horn on Aaron Copland’s “Outdoor Overture” with James Judd conducting. His other festival appearances include the Aspen Music Festival where he performed with the Aspen Festival Orchestra, Aspen Chamber Symphony and Aspen Philharmonic, and the Imani Winds Chamber Music Festival.

Austin has curated concerts in untraditional concert spaces, seeking new ways to expose non-classical audiences to the affective power of instrumental music. Recent performances from include “Magnificent Soul,” a collaborative warehouse concert featuring brass quintet, improvised cello and electronics which reframed the brass quintet repertoire through live electronic and acoustic responses and a Valentine’s day solo performance at the Three Pigs Vintage DIY space in Pittsburgh integrating solo horn with theatrical readings, recorded nature sounds and the music of Townes Van Zandt. He is currently working on a recording of works for brass quintet by minimalist composer Kali Malone.